Methodology
In the past I've found that a simple, brute force, method of testing database performance is to simply select a few records in a large table sorted by a non-indexed column. The idea is to cause a full-table scan which is obviously a bad thing for performance but exactly the condition I wanted to measure performance levels. In this experiment I tested two separate queries, one meant to provide poor performance and the second well performing. Respectively, the queries used were as follows. 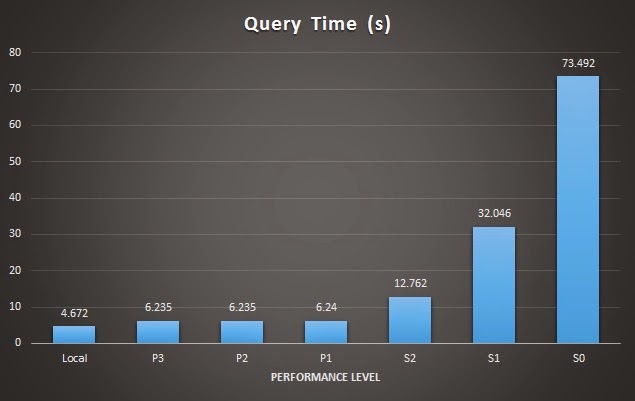 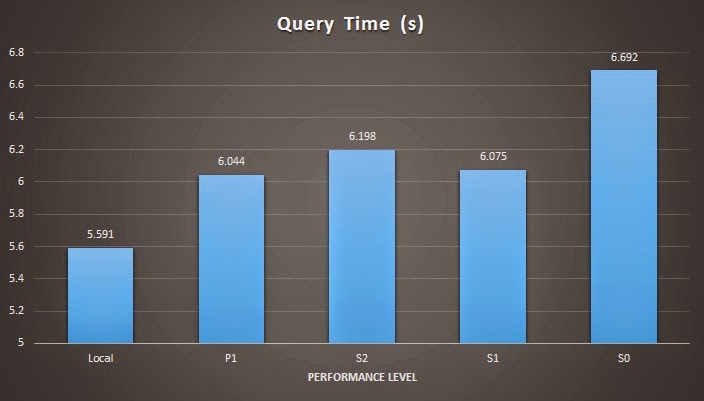 The results of the poor performing query show very clear structure for query performance through all Standard levels and into the first Premium level. After the P1 level structure is less clear and the results for all Premium levels are the same within standard deviation.

For the well performing query the results for all Azure SQL performance levels were the same within standard deviation an therefore levels P2 and P3 were excluded.

Conclusions
This simple test method succeeded in providing clear structure to the tested performance levels from the S0 through P1 levels. However, it failed to provide meaningful structure between the various Premium levels. The lack of discernible structure between Premium levels should be taken as a limitation of the testing methodology used in this exercise. The method used here was purposefully simplistic and was not expected to fully resolve the differences between all tested levels. There are many factors to consider when selecting an appropriate performance level beyond the execution performance of simple, single connection queries. A discussion of many of these additional factors can be found here

A quick comparison of the complexity of Web API versus Empty templates in ASP.NET Web Application creation. Values…

I recently attended the seminar CloudFest Azure Workshop at the Microsoft offices in downtown Portland, OR. The event was…